No products in the cart.

Truffle chips by Tartuflanghe, the new way of tasting chips. The highest quality potatoes, exclusively fried in olive oil and sunfloweroil, giving the chips unique features of crispy and perfectgold color, and gently seasoned with real truffle for superior taste. Thanks to their thickness Truffle chips can be dipped in to sauces or used for plenty of versions of finger foods and tapas.

Truffle Chips are seasoned with real freeze-dried Truffle (Tuber aestivum Vitt.), to please the palate of truffle lovers.
Crunchy and thick, Truffle Chips are perfect to be enjoyed alone as well as for inventing new versions of finger foods, tapas or to be crumbled on salads.

Balsamic vinegar infused with white truffle flavour. '10 Travasi' means it has been matured over time in a series of 10 wooden barrels (approximately 10 years), creating a  a rich, sweet/savoury flavour – perfectly balanced with the fragrant perfume of truffles. The flavour is a true delight – use in dressings and marinades or as a drizzle for grilled meats. 40ml bottle in box.

The perfect aperitivo condiment! Made with White Truffle and italian EVOO it’s perfect for dressing pasta and risotto at the end. Pure indulgence!

Brezzo are Italian honey experts, sourcing a range of specialty honeys from wild flowers and using non-thermal extraction treatments to ensure the honey is treated as gently as possible.

A favourite of food-lovers everywhere, this Ligurian extra virgin olive oil is gently infused with white truffle to create the perfect balance of flavours: the subtle perfume of the truffle complementing the fruity flavours in the oil. Use in pasta dishes and risotto, eggs and salads. 250ml bottle.

This oil is from producer Casa Olearia, based in the heart of the Ligurian Riviera – a region known for producing high quality extra virgin olive oils.

The perfect gift for this Christmas! Our unique range from Brezzo has just arrived. Including some pantry essentials and entertainment delights – all foodies will be pleased.

All beautifully gift-wrapped in a rustic wooden hamper box.

The perfect aperitivo condiment! Made from the best ingredients – EVOO, Summer truffle, Capers, Mushroom and Anchovies – it’s perfect spread on crouton to compliment any antipasto board for those summer long night.

Brezzo are Italian honey experts, sourcing a range of specialty honeys from wild flowers and using non-thermal extraction treatments to ensure the honey is treated as gently as possible.

Manchego is Spain’s best-known sheep’s milk cheese and has official DOP status. This raw milk farmhouse version is matured for a minimum of 12 months creating a firm, compact texture. Truffle Manchego has a soft and dense texture with crushed black truffles. An elegant, very well balanced cheese with sweet, creamy and mushroomy flavours and an intense aromatic flavour. Perfect for your cheeseboard.

More than just a snack, these crisps are a real treat for cosmopolitan consumers who appreciate nature, value tradition and take care of their health. Discover a new concept of crisps: tastier, healthier, crispier and more natural.

The low-temperature slow-frying method used for San Nicasio potato crisps avoids the formation of undesirable substances and is the best guarantee of quality, while ensuring a uniform taste and texture at all times.

San Nicasio’s approach to gastronomy is perfectly in line with the philosophy of the Slow Food movement, which advocates a cuisine that is opposed to the idea of “fast food” and more radically to the accelerated lifestyle of today’s society, which distances us from the good things in life.

Moreover, the rich flavour of Himalayan salt allows this recipe to be low in salt (0.75g salt/100g) compared to traditional crisps.

This Apple & Truffle Mustard Fruits is a delicious accompaniment for cheese soft cheese like brie and robiola style. Our favourite is served aside of a baked camembert with crusty bread. Mostarda (also known as Mustard Fruits), are a traditional Italian condiment of preserved fruit in a sweet and savoury mustard syrup.

This truffle brie-style cheese has an incredibly smooth, unctuous texture that coats your entire palate and a rich flavour with an amazing length and depth . Notes from all 3 milk types marry together – milky, creamy, subtly nutty, grassy – absolutely delicious. The wrinkly rind contributes a light earthy flavour that may become more pronounced as the cheese matures.

The perfect marriage of a tuscan pecorino with bianchetto shaved truffle from Norcia, Umbria. The texture is smooth grassy and nutty from sheep’s milk cheese. The truffle throughout the cheese have a distinctive flavour. The milk for all Il Forteto cheeses is sourced from local farms in the Mugello region of Tuscany and made into cheese within 24 hours of milking.

Site by Squeeze Creative
Back to top

Be the first to review “TartufLanghe Truffle Chips 100g” 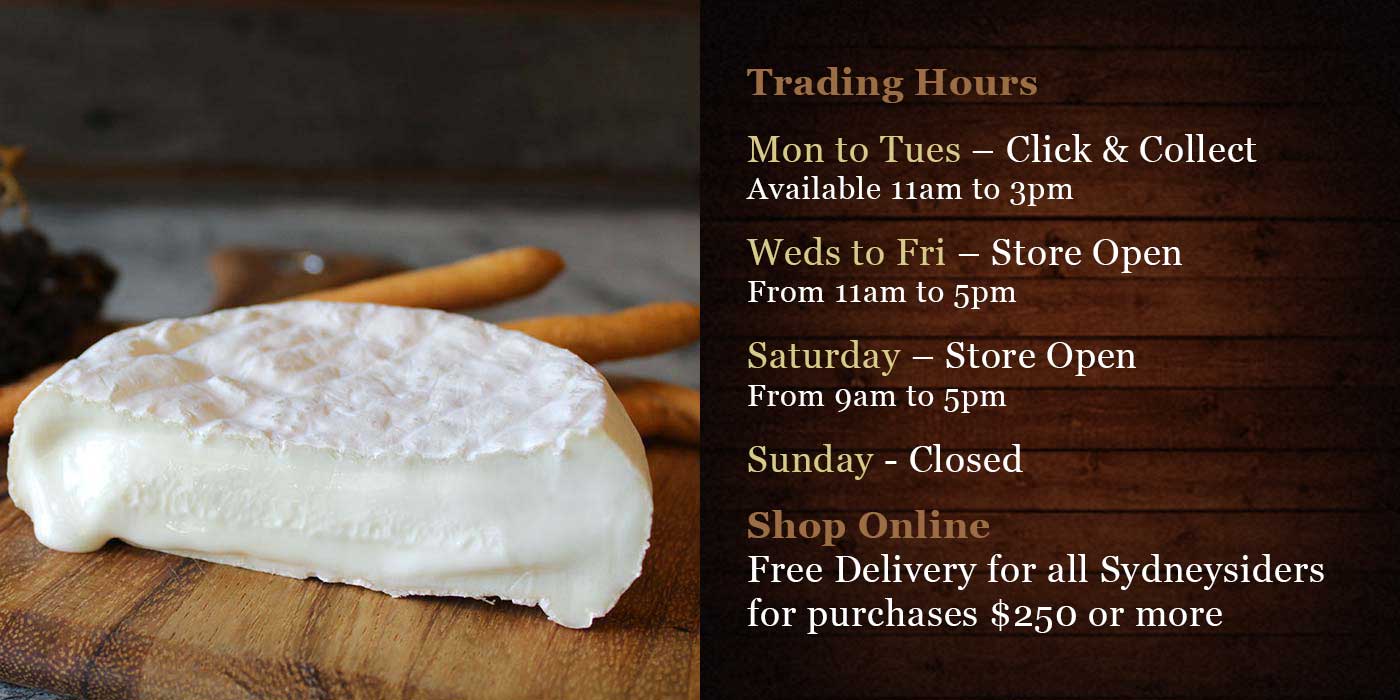